I recently received an email about a dairy farm in Ireland where as many as 50 newborn calves developed abnormal rapid breathing after birth. The herd had blood, silage and soil samples tested. Values appeared to be normal, except iodine was marginally low. A previous post, “Newborn Calf with Rapid Shallow Breathing” discussed what’s going on in individual animals with this breathing condition which occurred after an assisted or difficult birth. But none of that explains why so many full-term calves have developed symptoms of respiratory distress syndrome on this farm. 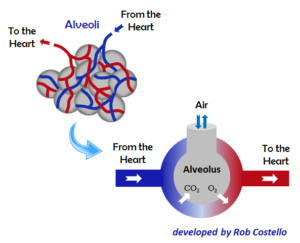 Alveoli: Air and Blood Flow in the Lungs

Respiratory distress syndrome is often associated with premature calves whose lungs have not fully developed. The lung tissue produces a surfactant that lowers the surface tension on the alveoli. In healthy calves this surfactant facilitates the transfer of oxygen and carbon dioxide across the alveolar membranes, helps prevent the alveoli from collapsing during exhalation, minimizes the work necessary for respiration and is part of the innate defense mechanism of the lungs. Premature calves that cannot produce adequate surfactant will likely develop some degree of respiratory distress syndrome.

In the case of our Irish farm, the respiratory problems are obviously not due to prematurity. So what’s going on? The literature is a bit sparse when it comes to respiratory distress syndrome and full-term calves, but I did find a clinical study that proved quite enlightening.

This study compared 53 beef calves with respiratory distress syndrome to 42 healthy beef calves born on farms in Belgium. Affected calves appeared normal at birth, but developed a rapid breathing pattern with abnormally high heart rates anywhere from 1/2 hour to 40 hours after birth. Researches used the time at which symptoms first appeared along with attitude and appetite to divide affected calves into two groups: depressed and undepressed. Depressed calves were rapidly affected, typically showing signs after 2 hours of life. These calves developed labored breathing in addition to rapid breathing, had reduced or no appetite and had trouble standing or were unable to stand. Eleven out of the 30 depressed calves died. Symptoms for undepressed calves appeared after 20 hours of life on average and were not as pronounced. Treatment with antibiotics and anti-inflammatory drugs did not seem to influence the course of the disease. For those calves that survived, symptoms lasted about 5-7 days.

Necropsy findings of depressed calves that died showed a combination of lung collapse and damage to the alveoli. The effect is to reduce the surface area of the lung for gas exchange which decreases the amount of oxygen in the calf”s bloodstream.

The surfactant on lung surfaces is basically a mixture of lipids and proteins. Depressed calves showed major biochemical alterations associated with surface tension properties when compared to healthy calves. The ratio of protein to phospholipids was altered, most notably those proteins associated with defense mechanisms, lowering surface tension and secretion of surfactant.

Endotoxins in depressed calves indicated infection which suppresses surfactant synthesis. Endotoxins also increase the permeability of lung tissue, leading to pulmonary edema. This results in the collection of fluid in lung tissue, making it difficult to breathe. The fact that no endotoxins were present in undepressed calves suggests that endotoxemia was a consequence of respiratory distress syndrome, not the cause.

In light of the lung immaturity of these full-term calves with respiratory distress syndrome, the researches looked at subclinical trace element deficiencies of copper, zinc, selenium and iodine in the dams. Of particular interest were iodine and thyroid hormones. Both are involved in the maturation of the surfactant system. Selenium deficiency can exacerbate the effects of iodine deficiency. They concluded that trace element deficiencies, and in particular iodine and selenium deficiencies, may have a dominant role in the development of respiratory distress syndrome in newborn calves.

Several mechanisms appear to be involved in the initial inhibition of surfactant production: surfactant protein levels, septicemia-enterotoxemia and deficiencies of iodine and selenium. The resulting collapse of lung tissue decreases lung function, increases the work required for breathing and leads to a rapid, shallow breathing pattern.  This results in oxygen deficiency leading to a vicious cycle:

As a result, surface cells on the alveoli are injured and cannot synthesize an adequate supply of surfactant.

As for our Irish farm, the widespread nature of the problem and the indication of iodine deficiency on the farm suggest that trace element deficiency in pregnancy diets may be contributing to the development of respiratory distress syndrome.

Other Posts About Breathing Abnormalities