Acidified milk replacer has been around a long time. The addition of organic acids helps control bacterial growth, making it appropriate for feeding systems where reconstituted milk replacer is left in the feeder for many hours or even days.

The level of acidification determines how effective a milk replacer is in reducing bacterial growth. The normal pH of milk replacer is about 6.0. Whole milk has a pH around 6.7. The pH of acidified products range from about 5.8 all the way down to 4.2. Between 4.2 to 4.5 is the most effective pH range for reducing bacteria. Below 4.2, calves are less inclined to drink.

This article takes a look at what happens inside the calf when it drinks acidified milk/milk replacer. These effects may help explain why some calf raisers observe benefits from acidification and others do not. 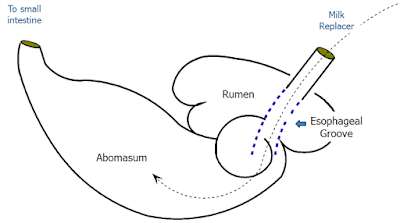 When the calf drinks milk or milk replacer, it flows directly into its abomasum. The esophageal groove (Figure 1.) closes off the opening from the esophagus to the rumen. With the groove closed, milk bypasses the rumen. This prevents it from being fermented and potentially causing digestive problems for the calf.

The base pH of the abomasum in a two week old calf is usually between 1 and 2. It’s eating little or no starter feed so the rumen will have little effect on abomasal pH. When the calf drinks milk replacer, abomasal pH rises to the pH of the milk replacer (about 6.0). Abomasal pH remains at this level for a couple of hours then decreases to the pre-feeding level over the next 6 to 7 hours. Figure 2A. During this time, milk replacer leaves the abomasum and enters the small intestine. The rate of abomasal emptying is controlled mainly by the volume ingested, its energy content, and to a lesser degree by the types of protein & fat, osmolarity and duodenal pH. After a meal, the pH in the doudenum reflects that of the abomasal contents, and ranges from 6.0 down to 1 or 2.

Compare this to a weaned calf at 8 weeks of age. Figure 2B. Abomasal pH is similar to adult levels and remains fairly constant, averaging about 2.1 to 2.2. This consistent pH is due to the more stable pH of the rumen and a consistent flow of nutrients from the rumen to the abomasum. This low abomasal pH is referred to as an acid barrier that decreases the risk of colonization of organisms such as Salmonella and E.coli.

Now consider what happens when you feed a milk replacer that’s been acidified to a pH of 4.2.  Maximum pH in the calf’s abomasum is now 4.2 instead of 6.0. Figure 3. Assuming maximum abomasal pH is maintained for a couple of hours and then starts to decrease as in Figure 2A, the calf should reach pre-feeding pH sooner and spend a longer time there between meals. As a result, average abomasal pH would be lower than with a non-acidified milk replacer. The maximum and average pH in the small intestine (duodenum) should also be lower. Feeding an acidified milk replacer would reduce pH variability and move the average pH closer to the acid barrier. This could theoretically result in an environment that is less favorable to certain pathogens.

How Does This Effect Calves?

That’s a good question. Effects of pH variation are likely to be most pronounced in younger calves. Their rumen is immature and contributes little to the digestive process. As the rumen grows and matures, it exerts increasing influence over the abomasal environment. There are many other factors that are in play at the same time. Feeding higher volumes of milk replacer or increasing the number of feedings per day increase the volume and the amount of time milk replacer is in the abomasum. This would increase average abomasal pH and increase the average pH of digesta entering the small intestine. The level of acidification, water consumption, exposure to pathogens and any number of things can affect the calf and how it may respond to an acidified milk replacer.

Nonetheless, acidification does affect the digestive environment of calves. How that affects health and performance parameters may be hard to gauge, but understanding the effect may help the interested calf raiser focus on certain management practices and adjust expectations.