When we think of automatic feeding systems for milk replacer, we probably envision groups of calves where each calf walks to a stall or feeding station to receive programmed allotments of milk replacer throughout the day. An automatic feeder can be a great time and labor saver and also opens up more options for intensive feeding and growth than traditional hand-feeding. In addition, most systems record calf feeding behavior which can help alert the manager to calf health and nutrition problems.

Realizing the advantages of automatic feeding has meant a commitment to group housing and feeding. That is until the CalfRail. This automatic feeding system by Foerster-Technik is based on the same feeding/mixing unit used in group feeding situations, but in this case the feed stall is replaced by an “arm” that moves to the calf via a rail system. 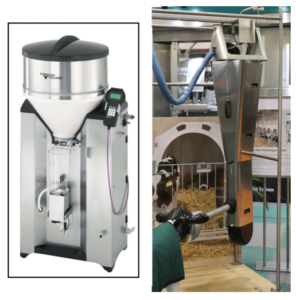 With the CalfRail, milk replacer is mixed in the feeder and is then pumped through a milk hose, out to the arm. The arm moves along the rail stopping at each calf pen, dispensing the calf’s programmed allotment. Magnetic stops are placed on the rail in front of each pen to signal the arm to stop.

Each calf has an assigned stop number and a feed allocation. When the arm reaches a stop, it turns, allowing the calf to drink. When the stop is complete, the arm moves on to the next calf.

Currently, the unit can be programmed for up to 8 feedings per day with a maximum of 2 liters (about 2 quarts) dispensed at a single feeding.

The CalfRail is best suited for use in a calf barn or at least an area that provides shelter from the elements. The arm typically travels and feeds calves in a straight line but can also negotiate curves to handle different barn layouts. The CalfRail currently feeds in temperatures down to 15-20°F (-10°C).  Foerster-Technik is considering a heating capability that would allow feeding in colder conditions. 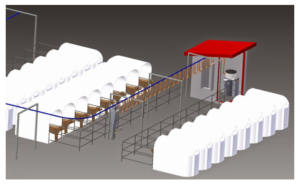 Each arm can feed up to 32 calves. Each feeder/mixer unit can handle two arms, or a total of 64 calves being fed with the CalfRail system. The plan is to increase the capacity to 4 arms and 128 calves that can be fed with one feeder/mixer. 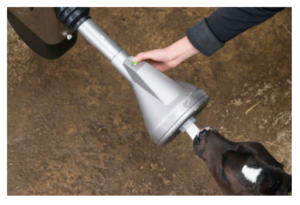 In group feeding situations, calves are usually hand-fed for the first week or two and then moved into the group feeding system. Having a CalfRail arm to feed these younger calves for the first two weeks allows you to train calves to the nipple and get an earlier start on stepping calves through an intensive feeding regimen. To help calves adapt to the CalfRail, each arm has a dispensing button that simplifies the job of training calves to the drink from the nipple.

Check out this automatic feeding video from Foerster-Technik for more information on the CalfRail.

At this time, the CalfRail is still a prototype. Although Foerster-Technik calf feeding products are sold through several dairy equipment companies, Foerster-Technik is actively involved in each Calf Rail prototype installation. Currently there are 15+ installations in Europe and two in Canada (with 4 or 5 more ready to go). In the U.S., customers are still in the planning and feasibility stage.

If you have questions or are interested in purchasing the CalfRail or other Foerster-Technik calf feeding products and you live in North America, contact:

Other Posts About Automated Feeders