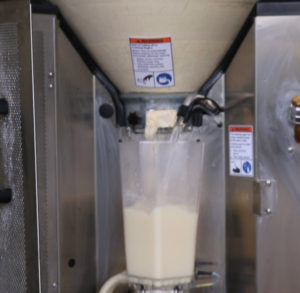 This temperature discrepancy should not generally be of concern. The fats used in most commercial milk replacers melt between 90 and 100 degrees F and the mechanical mixing action of the feeder facilitates solubility. Of course this assumes that the mix temperature of each unit is correct. Low mix temperatures can affect solubility, digestibility and animal performance while high temps can discourage calves from drinking.

A 2012 study by Virginia Tech of 10 dairies in Virginia and North Carolina with automatic calf feeders showed a range of mix/feeding temperatures from 81 – 118 degrees F. These data point out the need for routine mixing temperature monitoring throughout the year, making any necessary seasonal corrections. 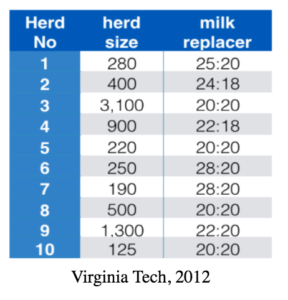 Feeding rates with automatic feeders are typically between 1.5 to 2.5+ pounds of milk replacer powder per day. Calves on higher feeding rates usually benefit from higher protein formulations while calves receiving a more traditional amount of milk replacer may benefit more from a more standard formulation such as 20:20 (% protein:% fat) or a 22:20.

The table below demonstrates how the milk replacer formulation works with feeding rate to affect gain. Values were derived from the 2001 NRC Nutrient Requirements of Dairy Cattle ration program. Consider the 28:20 in the second milk replacer column with a feeding rate of 2.5 pounds powder/day. The Energy Allowable Gain of 2.58 pounds reflects the potential gain provided by the energy consumed. ADP Allowable Gain of 2.49 pounds is the gain supported by the amount of protein consumed. In this case, ADP Balance is -10, indicating there is not enough protein to convert the available energy to gain. 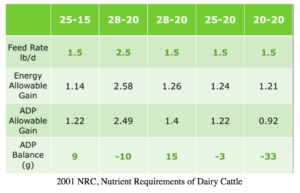 Maximum gain, therefore is 2.49 pounds per day, not 2.58, since protein is limiting gain in this case. You would need another 10 grams of protein to match the energy provided by the milk replacer and turn it into gain. The extra energy in this scenario will go toward production of body fat.

Ingredients and Other Factors

Automatic calf feeders can all do a good job of mixing milk replacer, but there are differences in mixing equipment. Some use less force or a shorter mixing cycle than others. These feeders may be a bit more sensitive to differences among milk replacers which may result in some undissolved powder after mixing.

Other Posts About Automatic Calf Feeders