As of January 1, 2017, any medically important antibiotic is subject to the feed directive rule and will require either a Veterinary Feed Directive (VFD) form for feed-delivered antibiotics or a veterinary prescription for water delivered antibiotics. The overall goal of the FDA is to promote the responsible use of antibiotics in food producing animals, helping to ensure a safe food supply and sustainable practices for both animals and humans.

This discussion focuses on feed-delivered antibiotics and the VFD. There are a dozen medically important antibiotics that will be transitioning from “over the counter” to VFD status. The antibiotic with the greatest impact on the distribution and sales of milk replacers is Oxytetracycline/Neomycin. Other milk replacer medications such as Bovatec and Deccox are not antibiotics so they are not affected by this rule.

Beginning in 2017, for an animal owner to obtain a feed containing a VFD drug, they must obtain a VFD form from their veterinarian. For a VFD form to be valid, it must meet the following requirements: 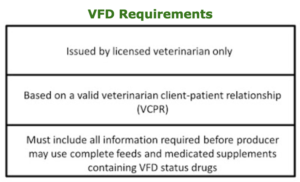 The veterinarian client-patient relationship is a very important component of this VFD rule. There is much language in the rule regarding on this topic . The VFD form must include all the required information for the animal owner/producer to purchase and use feeds and supplements containing a VFD drug.

How the Veterinary Feed Directive Works

The veterinarian and producer start the process with the VFD form. The diagram below shows the relationships and how it works. 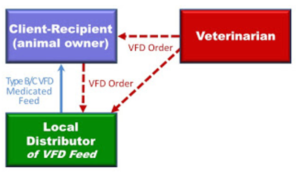 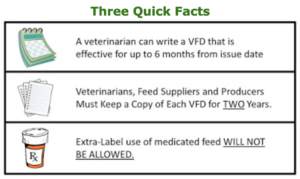 These additional boxes show the flow of product down from the manufacturing distributor, through an intermediate distributor and then then to the local distributor. Note that the Intermediate Distributor and Manufacturing Distributor do not receive copies of the VFD form. What happens here, happens outside of VFD form transactions. Everywhere up the chain, as indicated by the green arrows, is a Letter of Acknowledgement. Each distributor sends this letter to the next distributor up the chain informing them that they are handling VFD feeds in compliance with federal regulations. These letters allow VFD feeds to move down the chain to the dealer/local distributor so they can maintain inventory and fill orders immediately when they receive a valid VFD form. Letters of Acknowledgement must be renewed every two years.

The final piece of communication in this process is with the Food and Drug Adminstrition (FDA). Each distributor must send a one time Notification Letter to the FDA expressing their intent to distribute feeds containing VFD drugs. 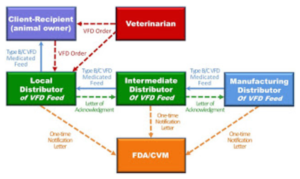 So that’s the mechanics of the VFD program in a nutshell. If you want more details, check out this video. You’ll find additional information about the Notification and Acknowledgement letters, distributor responsibilities an example VFD form, as well as answers to some Frequently Asked Questions.