Bottle feeding vs. pail feeding of calves is always an interesting and sometimes passionate subject. There are advantages to either feeding system, and I have personally been in both camps. This article is based on research evidence. It looks at anatomical, physiological, nutritional and behavioral aspects of feeding with bottles/nipples and open pails.

Effects on the Esophageal Groove 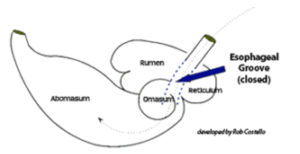 The objective is to keep milk out of the rumen. When calves drink through a nipple, little if any milk ends up in the rumen — typically less than 3 milliliters. Although effective esophageal groove closure also occurs with open pail feeding, there is much more variability. Milk enters the rumen more frequently and varies from a few milliliters to well over 50% of the milk consumed. Large volumes of milk repeatedly entering the rumen can lead to serious metabolic problems. Low rumen pH, growth of yeast rather than normal rumen microbes, small distorted rumen papillae, poor production of volatile fatty acids (VFAs) and low cellulose digestion can occur. Feeding milk through a nipple provides consistent, efficient groove closure, minimizing the chance that milk will enter the rumen.

Water drinking and the esophageal groove

If things go to plan, water and solid feed enter the rumen. Water provides the medium for starter feed digestion in the rumen and encourages feed intake. When water is consumed immediately after milk feeding, the esophageal groove may still be closed. This causes water to directly enter the abomasum rather than the rumen. If this happens on a regular basis, starter intake and rumen development may be delayed. 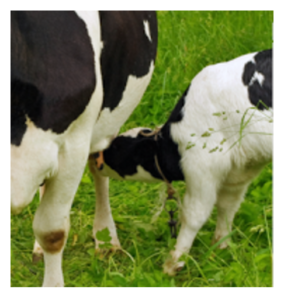 Body position and the esophageal groove

When suckling a cow, a two-week old calf ingests two quarts of milk in about 3.5 minutes. At eight weeks of age it takes about 2.4 minutes. Observations obtained at a calf research facility show that suckling a nipple bottle is about 35% faster than suckling the cow, and drinking milk from an open pail is about 85% faster than the cow.

The rate at which a calf consumes liquid feed affects the rate with which the liquid moves through its digestive tract. The slower consumption rate associated with nipple feeding enhances several physiological processes associated with digestion. Saliva production is around three times greater with nipple feeding, resulting in more salivary lipase mixing with milk as it is swallowed. This begins the process of fat digestion in the calf’s abomasum.

With the secretion of more enzymes and digestive acid, more fats and proteins are digested in the abomasum when feeding with nipples. More digested nutrients flowing from the abomasum into the small intestine means there are more nutrients ready to be absorbed.

Some studies show more episodes of diarrhea, more persistent and more severe diarrhea with open pail feeding, while some studies found no difference. Research specifically designed to evaluate the possible effects of feeding method on calf diarrhea provide mixed results. There does not appear to be evidence showing that nipple-feeding leads to more diarrhea issues than open pails. In other words, when undesirable results occur, they occur with pails. 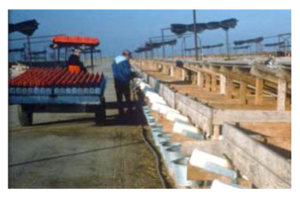 A specific health reason cited by many large calf raisers for bottle feeding instead of feeding with pails is the tendency of some calves to aspirate milk into their air passageway and even into their lungs when drinking from a pail. Coughing and a raspy or “rattling” sound during breathing after drinking are telltale signs of aspiration. These operations relate the use of bottles and nipples to fewer cases of pneumonia and fewer treatments.

Other Physiological and Behavioral Effects

Behavioral differences in calves have been reported between the two feeding systems. Non-nutritive oral activities such as sucking objects, sucking and nibbling on parts of the pen, self-licking or licking calves in adjacent pens is reduced in individually housed calves. Nipple-fed calves show lower heart rates during and just after feeding and return to a resting state more quickly after a meal. In group feeding situations, sucking from a nipple may reduce cross-sucking that occurs in group housing situations.

There are other interesting management areas to compare and contrast, such as feed delivery & clean-up and the spread of disease, but they are a bit more subjective and beyond the scope of this post.

In summary, calves can be efficiently and effectively raised using either bottles/nipples or open pail feeding of milk or milk replacer. There is a greater potential for variability and an undesirable animal response with pail feeding compared to nipple feeding. When all is said and done, nipple feeding is the gold standard against which pail feeding must be evaluated.