From a clinical evaluation standpoint, it’s fairly easy to gain insights into an animal’s acid-base status from a blood sample. A pH measurement gives an estimate of the hydrogen ion concentration, [H+], which can be used along with a CO2 measurement from a blood gas analyzer to calculate the concentration of bicarbonate, [HCO3–], present in the animal’s bloodstream. Even better, these values can be used to develop an effective treatment protocol. It would therefore seem logical that variables such as pH, [H+] and [HCO3–] must be central to a problem and that they are determinant forces in acid-base physiology.

In reality, this assumption is at the core of much of the difficulty and confusion that so often accompanies a developing understanding of acid-base mechanisms. The first three posts in this series demonstrate that acid-base adjustments occur without regard for variables such as bicarbonate. This post will be no different in that regard, and will explore how acid-base variables relate to each other and what that means to acid-base balance.

An important consideration when evaluating variables and their acid-base relevance is whether changes in their concentration occur independently or whether they depend on changes and interactions among other variables.

Figure 1 provides a description of each of these independent variables. Feel free to read about PCO2 and [ATOT], but this discussion will focus on [SID] — we are already familiar with strong ions, and adjustments to [SID] are how electrolyte products affect acid-base status. [SID] is simply the sum of all positive strong ions and all negative strong ions. Normal plasma [SID] is around +40. 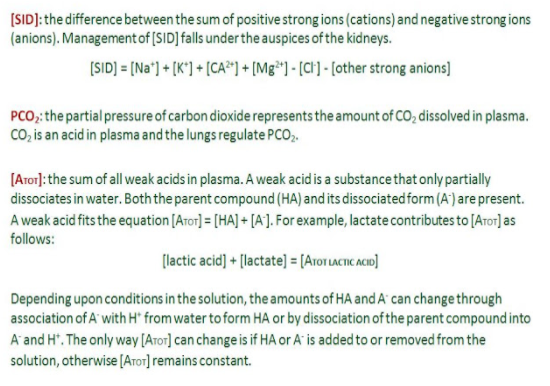 But in reality we don’t add bicarbonate by itself — we also add sodium. And sodium concentration is a part of [SID], an independent variable. While bicarbonate is heading off to the lungs to be processed, the added sodium is raising [SID] which lowers the hydrogen ion concentration and raises pH.

This ends the series on electrolytes and acid-base chemistry. On a personal note, I have always found this subject matter both challenging and fascinating. I hope these discussions have proven interesting and informative, not too painful, and provide useful insights the next time you evaluate an electrolyte product.

Other posts in this series: