The Role of Water in Acid-Base Regulation

So…what happens to them? It’s actually quite simple. They dissociate, or separate into their basic components when they dissolve in water — or any aqueous medium such as blood plasma and other body fluids. Not accounting for this dissociation can lead to sizable miscalculations when evaluating electrolyte products. This dissociation also has a profound effect inside the calf, which is the subject of this post.

A good indicator of whether or not an electrolyte ingredient will dissociate is the presence of a strong ions. Sodium, chloride, potassium, calcium and magnesium are all strong ions. It’s pretty easy to identify which ingredients contain strong ions since their presence is indicated in the ingredient name. 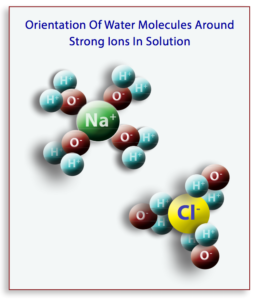 Sodium has a strong positive charge associated with it while chloride has a strong negative charge. On their own, both ions would readily react with other substances – but water molecules prevent this from happening. Figure 1 shows how water molecules orient themselves around the dissociated sodium (Na+) and chloride (Cl–) ions. By orienting themselves in such a manner they isolate the ion and its charge, and prevent it from reacting with other substances. The negatively charged oxygen of the water molecule orients toward the positive sodium ion. Positively charged hydrogens orient themselves toward the negative chloride ion. Let’s take a closer look at what happens when sodium chloride is mixed with water. Sodium and chloride provide the backbone of most electrolyte solutions – they are the major electrolytes in plasma and play a fundamental role in the metabolic regulation of acid-base balance.

By forming complexes with water, strong ions become chemically inert and don’t enter into reactions within the body. It’s easy to imagine the serious consequences that could result if strong ions were free to react and form compounds within plasma and cellular fluids — it would certainly add a new dimension to kidney stones.

Water readily dissociates into H+ and OH– and readily re-forms in response to changes in the solution, generating or destroying  H+ and OH– in the process. Water is the perfect medium for this purpose. No other substances are required to supply or to remove OH– or H+. No other reactions need to take place.

These characteristics of water are fundamental to acid-base chemistry. Much of the confusion and conceptual difficulties surrounding acid-base mechanisms arise from the mistaken idea that OH– and H+ must be added to or removed from the solution from the outside in order to bring about a change in acid-base status. Water is the perfect medium. It is an inexhaustible reservoir of OH- and H+ within the body and is constantly adjusting to changes within the system.

Sodium chloride is an important electrolyte ingredient, but its inclusion in the formula as the sole source of these two ions results in little change in the acid-base status of an animal. This is due to the counter-balancing effect of the two ions.  Each sodium ion added to the solution is offset by a chloride ion. To bring about a change in acid-base status, this relationship would need to change.

Electrolytes are formulated for a variety of purposes and functions. Calves that are dehydrated due to diarrhea may also suffer to some degree from acidosis, where plasma pH is below normal. To help remedy this situation and bring about an increase in plasma pH, the electrolyte should provide more sodium than chloride.

Unfortunately, strong ions cannot be added to a solution by themselves. In dry form, they are bound to some other substance which must be added to the solution along with the strong ion. In this case, where we are interested in replacing chloride, ingredients like sodium bicarbonate, sodium acetate and sodium lactate can be used to replace a portion of the sodium chloride in the formula. This provides sodium without the counterbalancing effect of chloride. Bicarbonate, acetate and lactate do not have the effect within the body that chloride does. They do not form complexes with water, they do not have the same attractive forces and they do not have the same effect on hydrogen ion concentration. They are also free to enter into reactions in the body. Sodium bicarbonate, sodium acetate and sodium lactate are sometimes referred to as alkalinzing agents, which will be the subject of future posts.

Other posts in this series: